Alfie Patten’s girlfriend, Chantelle who was 15 told him that she was pregnant when he was only 12.

Read Also: Pregnant Woman Refused CS Because Her Church Said It Was Demonic(See What Happened Next)

At just 4ft and 4inches, he was hopeful for the future and had no idea about the path that his life would take. 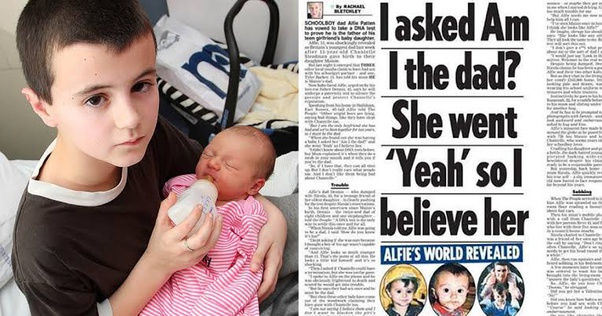 Chantelle was Alfie’s first girlfriend, and according to Chantelle, she had never been with any other boys. Despite their age difference the two were a happy couple and love spending time together. Alfie even stayed over at Chantelle’s house from time to time.

One day, after Aflie and Chantelle had been dating for a while, Alfie was getting ready to go out to play with his friends. He knew that Chantelle would be there and was excited to see her. It was a day like any other, and Alfie could never have expected what was coming next.When he went out in the street to play, Chantelle approached Alfie and told him that she had some news. That’s when she dropped a bombshell and informed Alfie that he was going to be a father

It took a while for Alfie to have a good grasp of the situation. He didn’t know anything about babies and wasn’t really sure how to approach the topic with his mum.He decided to bite the bullet and tell his mom the truth. When she found out, she was devastated.

Alfie was dubbed Britain’s youngest Dad and made headlines across the country.

THEN CAME THE SHOCK—-THE DNA TEST

As the story of Alfie and Chantelle’s pregnancy circulated in the local area, people began to cast doubts about whether or not Alfie was the real father. A lot of people questioned whether Alfie was even old enough to father a child, as he didn’t seem to have hit puberty yet

Others insisted that the baby’s father was another boy in the neighborhood that Chantelle had also been with. Chantelle hit back at the claims stating ‘I love Alfie… there had been no one else…the other stupid boys are lying’

Despite Chantelle’s reassurance that Alfie was the father, rumors continued to circulate in the area. Two other boys had now come forward, claiming to have slept with Chantelle at a time that could make them the baby’s father.Alfie tried to ignore the claims and took Chantelle’s word that he was the father. At this point, Alfie was beginning to get used to the idea of being a dad and had spent a lot of time caring for his newborn baby.

However, Alfie’s parents couldn’t ignore the fact that other boys were claiming to be the father. In order to dispell any doubts, they suggested to Alfie that they do a DNA test to find out who the real father was.

On the day of the test, Alfie nervously awaited the results. One of the other boys, Tyler, had given detailed accounts of the night he spent with Chantelle and this made him very worried about what the outcome would be. After waiting anxiously in the test office, they were finally called back to hear the results. Unfortunately for Alfie, the test came back negative. He wasn’t the father. Alfie immediately broke down in tears. According to his mum, “he was absolutely hysterical. He burst out crying and then he ran out of the room.” 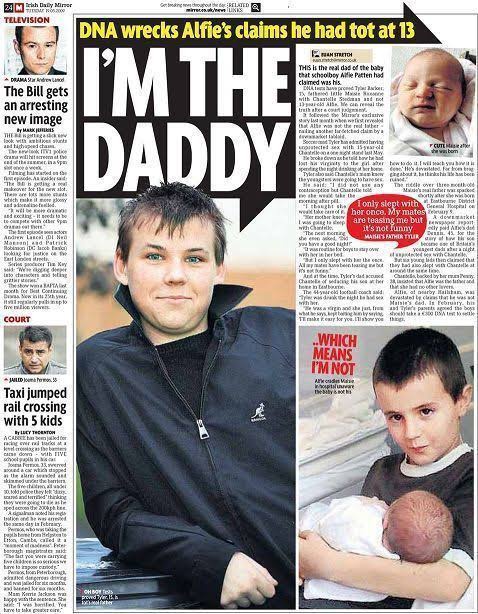