A lot depends on where in the head the bullet hits ,Bill Caffrey began as he narrates his story, its angle to the head and the power of the cartridge fired he said

An EMT friend who worked in Oakland, California, once told me that a good third of his patients with gunshot wounds to the head did not lose consciousness. About another 20% went in and out of consciousness en route to the hospital.

The head is semi-spherical and sometimes bullets will “skip” along with the bones of the skull and “slide off” without piercing the skull. They can leave behind seriously indented bones or fragments, though, and lots of bleeding.

Some years ago there was a news story about a domestic dispute gone bad. A woman’s estranged husband argued with her, pulled out a .357 Magnum revolver, and shot her in the forehead from approximately 15 feet. Most of us would say that’s likely to be instantly fatal, but the moon and stars aligned just right and the Gods smiled down on the woman.

The bullet struck high in the forehead, pierced the skull, then passed between the left and right lobes of the brain where there is a narrow channel and exited the back of her head. EMTs arrived and found her conscious, lucid, and holding a compress to the back of her head to control the bleeding. She had a helluva headache too. Surgeons removed a few bone fragments and repaired the bone and (skin) tissue damage and she recovered.

Then, there’s this guy… 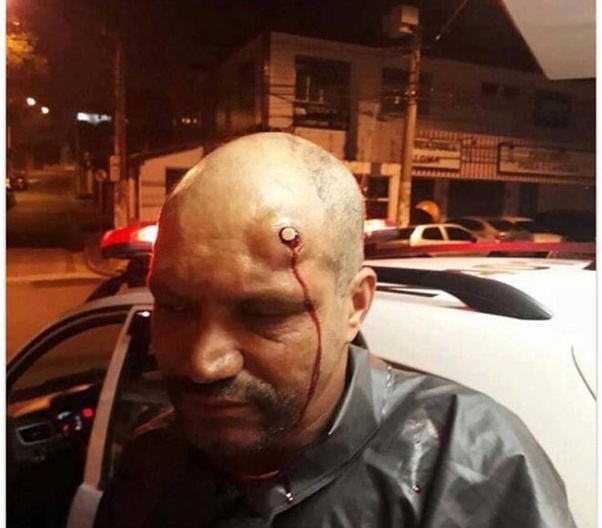 Yes, that’s a .45 ACP slug stuck in his forehead. I’m told that he was several blocks away from shooting and was struck by an errant bullet (there is some speculation the bullet ricocheted off a car beforehand).

Possible skull fracture here, but he was conscious, lucid, with some pain, and more than a tad upset his evening was ruined, I’m sure. At times like these, I think it’s a good idea to thank the man upstairs and reflect on the purpose of your life.