African buffalos are one of the most dangerous animals and are the only known animals that have developed a spirit of revenge. Unreliable statistics indicate that they kill 200 people a year, outnumbering lions. 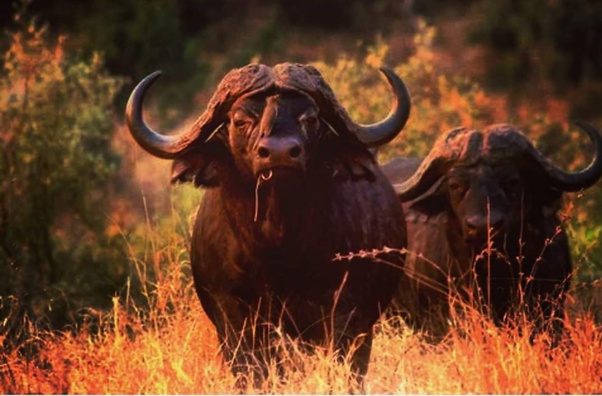 Their favorite victims are the lions but the piece of resistance is even the abominable hunters who pay $ 50,000 to have the right to hunt a Buffalo.

Killing a buffalo is not for amateurs. A very powerful caliber, at least .375 is required and they hardly fall on the first shot. In fact, they continue to charge at 50 km per hour, while the hunter counts the remaining ammunition. Even if he manages to kill his victim, it is good to remain alert, because it is not uncommon for the herd to attack, appearing out of nowhere, to avenge the slaughtered companion.

Once the hunter has fired the first shot, he immediately turns into the hunted and, if the animal is injured, no matter how long it takes, the buffalo will not give up, it will remain tireless, in the ambush, waiting for the opportunity to kill its executioner, which may be its last act.

Always in silence, at a distance during the day, but when night comes, he approaches the camp and, if the opportunity arises, he is quick and deadly with refinements of cruelty.

Revenge becomes stronger than life itself. It is known as the black death or Widowmaker.

If the opportunity does not arise, he will seek help from the herd and in this case, the destruction is total, especially when they attack the camps at night or groups of lions, because buffaloes somehow know, that every lion in life has already killed some old or young buffalo.

So the African buffalo kills out of hatred, out of revenge and then I remember Guimarães Rosa, a Brazilian writer.

“Because when you’re angry at someone, it’s the same thing as allowing that person to spend time governing your ideas and feelings.”

Some human beings can only be understood by knowing the African buffalo.