It depends on what kind of gorilla.

If it’s an adult female, I assume she’d just roll her eyes at you.

If it’s a playful youngster, he/she might take it in good spirits as a classic bit of banter. There are plenty of clips of young gorillas annoying their parents with chest-beating and the like.

If it’s a silverback, then all bets are off.

Pounding your chest in front of a dominant silverback is like going up to the biggest guy in the bar and telling him if he were a band, he’d be Nickelback. 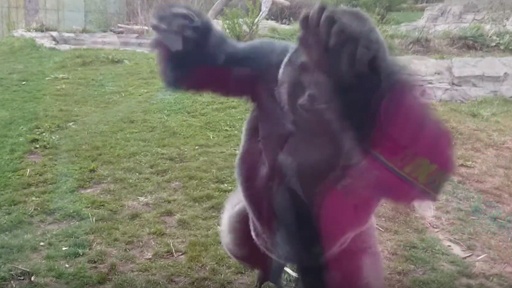 “Cos we all just wanna be big rockst—aaaaaaaaargh”

For example, check out the video below.

To start with, the silverback gives what seems like a mock charge. I think it’s directed at the boy because he’s jumping up and down (making himself bigger/threatening behavior?), but I could be wrong.

The main event (skip to about 1 minute if you want to see it) is certainly caused by the little girl, who bangs on her chest.

If you’re in a gorilla troop, you have to learn to respect the alpha. He’ll be chill most of the time, but he’s not afraid to put troublemakers in their place. 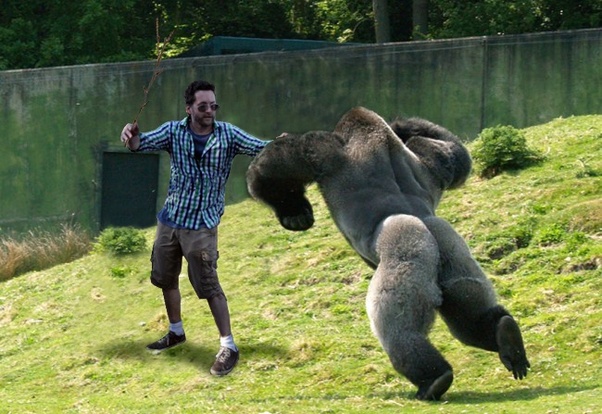 Some wild animals (often predators) can be deterred by bluffing that you’re bigger and scarier than you really are, but this is a bad idea with gorillas. They’re not predators so they probably wouldn’t attack unless provoked.

Silverbacks beat their chests for a few different reasons, but banging on your chest can be seen as a challenge to his dominance.

From what I gather fights don’t usually escalate to serious injury, but then again other adult gorillas can handle a lot more punishment. If that glass weren’t there, he would have pancaked that little girl before she had a chance to say “it’s just a prank, bro.”

The poor fella’s probably sick of getting taunted by hairless apes. I don’t blame him.