Globalization is the word used to describe the growing interdependence of the world’s economies, cultures, and populations brought about by cross-border trade in goods and services, technology, and flows of investment, people, and information.

Countries have built economic partnerships to facilitate these movements over many centuries. But the term gained popularity after the Cold War in the early 1990s, as these cooperative arrangements shaped modern everyday life.

Importance of globalization in a country:

Globalization is the free movement of goods, services, and people across the world in a seamless and integrated manner. Globalization can be thought of to be the result of the opening up of the global economy and the concomitant increase in trade between nations. In other words, when countries that were hitherto closed to trade and foreign investment open up their economies and go global, the result is increasing interconnectedness and integration of the economies of the world. This is a brief introduction to globalization.

Further, globalization can also mean that countries liberalize their import protocols and welcome foreign investment into sectors that are the mainstays of their economy. What this means is that countries become magnets for attracting global capital by opening up their economies to multinational corporations. 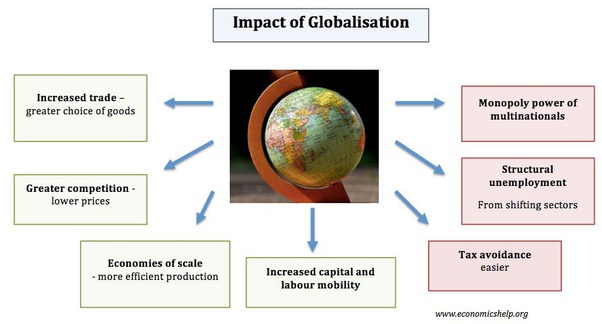 Globalization is grounded in the theory of comparative advantage which states that countries that are good at producing a particular good are better off exporting it to countries that are less efficient at producing that good. Conversely, the latter country can then export the goods that it produces in an efficient manner to the former country which might be deficient in the same. The underlying assumption here is that not all countries are good at producing all sorts of goods and hence they benefit by trading with each other. Further, because of the wage differential and the way in which different countries are endowed with different resources, countries stand to gain by trading with each other.

Globalization also means that countries of the world subscribe to the rules and procedures of the WTO or the World Trade Organization that oversees the terms and conditions of trade between countries. There are other world bodies like the UN and several arbitration bodies where countries agree in principle to observe the policies of free trade and non-discriminatory trade policies when they open up their economies.