Are pythons immune to snake venom?
No, they are not.

A King Cobra (the worlds longest venomous snake) had attempted to catch, kill and eat this Reticulated Python (grows to be the longest snake in the world) and had been coiled and strangled by the python and died in the process. Both were dead when found. 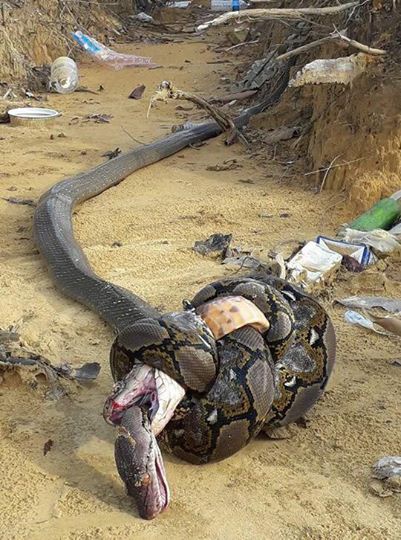 The King has met its match…

When cobras attack, they target the base of their victims’ heads, then kill by injecting a venomous cocktail that quickly shuts down nervous systems and paralyzes their prey. They can pretty much tackle most snakes they come across.

Bitten behind its head by the cobra and suffering from the hooded snake’s deadly venom, the python attempted to defend its life by squeezing its attacker to death. It succeeded. They use their muscles to strangle meals, which normally comprise mammals—not other snakes.

Note* It’s not clear how often these types of apex snake clashes happen in the wild. While we may not be sure that this fight to the death resulted from a natural encounter, or was forced upon the snakes, no matter the trigger, it seems the sequence of events is clear in this case. The king cobra attempted to bite a bit more than it could swallow. Given the enormous size of the adult python, and the python, in turn, did exactly what pythons do: It coiled up around and strangled its attacker.

Ultimately, a python’s power is no match for the cobra’s venom. It would kill the python pretty quickly, probably within 30 minutes, they would both be dead.