August 28, 2013, heavy metal festival. As my usual, I try to stay more or less in the middle of the room, not too far ahead, but not too far away. It allows me enjoy the show without being deaf. And that day I choose the right side looking at the stage. 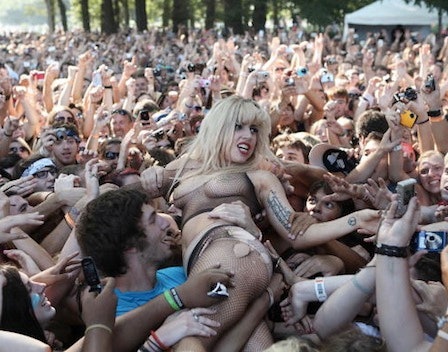 As I listen, I observe the population around me. Metallic, dark, normal people. Then my eye falls on two guys.

They will be no more than twenty-two, very young. Both skinny, T-shirt and jeans for him, tank top and miniskirt for her. They are making out violently under the notes of a thrash band, a very unusual sight. They are pressed against the wall of the sports hall, the one that has the bleachers above them.

Ignoring hundreds of people above them without being able to see them, and the darkness of the room maintains an accomplice obscurity over their privacy.

The question comes spontaneously to me: but what do you come to do at a rather expensive concert, if you then spend your time making out? After two more songs I turn around and see them still there, with a further advancement. From kissing on the mouth, we moved on to kissing with groping. He slipped his hand under her tank top, you can see it moving all over the girl’s chest. The bouncer perched on the railing of the steps a meter from their heads sees nothing because these are right under his feet.

Two more songs, now she too has slipped her hand inside the boy’s jeans, moving it conspicuously. The dark protects them and they are in such a secluded position that no one dares to stay so far from the music. They spent 100 euros for petting, incredible … I think to myself.

And when the band playing ends, the two are so waving and waving their hands from each other on all sides, that the scene has become sensationally in the public domain and I see groups of friends giggling and nudging each other looking at the Romos and Giulietta metal version. Yes, because it could not be otherwise, I think: they must necessarily have sought shelter in an impenetrable place for their parents to be able to consume their love away from the wrath of adverse families!

When the lights come on to allow the change of set-ups on stage, the two are recomposed. They are soaked in sweat (imagine August 28 in a closed room in the midst of 6,000 people), and with an annoyed expression as of someone who was interrupted at the most beautiful.

After a twenty minute break, the lights go out again. And as soon as the lights go out, I turn around as if by a conditioned reflex and … there they are again! Start again with the background of the music on hold (obviously metal). Kisses, hands everywhere, everything as before. And the people next to me laughing at the scene! It is now a show within a show.

Then the escalation you don’t expect.

Perhaps it was for the sacred fire of passion, or perhaps for the background music, or perhaps for too prolonged abstinence, the boy took her beauty and threw her face to the wall. Then he lifted his already very short miniskirt and with a barely visible, but easily guessed move, took his c**k and placed it where he so craved. Then he began to busy himself conspicuously behind her, while her girl was leaning with her arms against the wall.

I still remember well a group of guys who started whistling with their little fingers in the corners of their mouths to cheer on the two.

These are crazy, I thought, looking up at the nearest bouncer, the one above them, as oblivious as the entire crowd above them.

But the unexpected happened at the best.

The music stops and the lights come back on! The two, caught off guard, hastily leave. Whoever gets the worst of it is he who stays with his bouncing c**k and sensationally in sight under the powerful headlights. Instead, she gets away with a lightning-fast maneuver to lower the mini.

Roar of the audience. And not for the music.