North Sentinel Island people don’t want you. If you come near in a helicopter, they point arrows at you until you fly away.

Read Also:Here’s What Happens If A Man Gets Swallowed By A Blue Whale 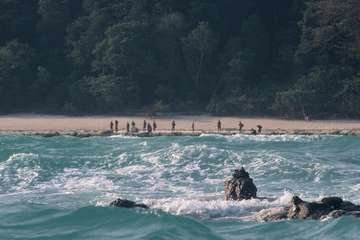 They’re missing out on GPS, Wi-Fi, and ’60s rock music, but they might have the right idea. The last time that someone visited, 1879, they stole an elderly couple and some children – most of whom quickly died from the disease.

They are aware of outsiders. They now have metal tools, after scavenging from shipwrecks.

The Indian government, acknowledging that contact with tribes on the other Andaman Islands has only brought disease and dependency, has adopted a form of Star Trek’s prime directive. Orders are to leave the Sentinelese alone until they come to us or, for example, develop their own interstellar travel.

The Sentinelese still don’t welcome strangers, but Jon Hjalmar said that there were two friendly encounters with the Sentinelese in 1991. A team of anthropologists floated coconuts to them as “getting to know you” presents and visited with them on one of their beaches.

Sadly, a young man tried to visit in 2018 and was killed.