Many wondered why Werner, who scored his first Chelsea goal in the first half, chose not to step up to the mark. 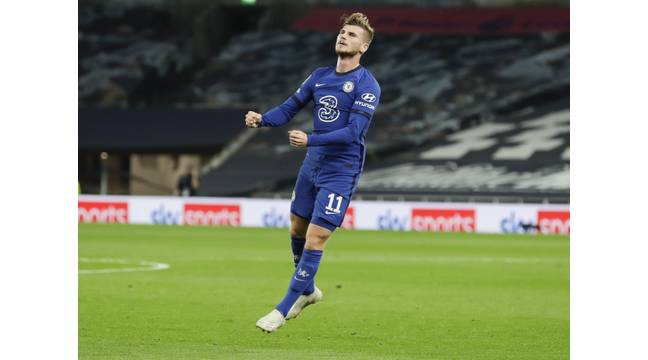 Chelsea striker Timo Werner did not take a penalty against Tottenham Hotspur because he was suffering from cramp.

Werner opened the scoring inside the first twenty minutes with a low drive that caught Hugo Lloris out.

Despite having a number of chances, Chelsea failed to increase their lead against a weakened Spurs.

The Spaniard sent a teasing ball into the box for Erik Lamela to slot home at the back stick and take the game to penalties.

Jose Mourinho’s side through.

Dier was handed the Man of the Match award as he inspired his team to victory in the game.

Frank Lampard revealed after the game per TeamTalk

“We spoke to the players,

“You work on penalties and try and have a plan but it’s very difficult to know.

“Timo had some cramp at the end and Timo would have probably taken one so we had to adjust around that.”

Mourinho made nine changes from Sunday’s 1-1 draw against Newcastle United due to a congested fixture list.

They welcome Maccabi Haifa in the Europa League on Thursday before traveling to Old Trafford on Sunday to take on Manchester United.

Comments
Watch Mourinho’s Reaction To Dier ’s Toilet Break vs Chelsea
Breaking!!! Chelsea Star Barkley Joins Aston Villa On Loan
To Top
%d bloggers like this:
We use cookies to ensure that we give you the best experience on our website. If you continue to use this site we will assume that you are happy with it.Ok